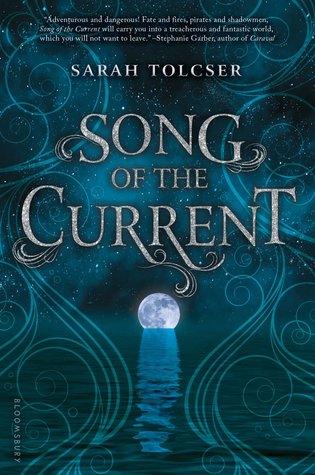 Caroline Oresteia is destined for the river. For generations, her family has been called by the river god, who has guided their wherries on countless voyages throughout the Riverlands. At seventeen, Caro has spent years listening to the water, ready to meet her fate. But the river god hasn’t spoken her name yet—and if he hasn’t by now, there’s a chance he never will.

Caro decides to take her future into her own hands when her father is arrested for refusing to transport a mysterious crate. By agreeing to deliver it in exchange for his release, Caro finds herself caught in a web of politics and lies, with dangerous pirates after the cargo—an arrogant courier with a secret—and without the river god to help her. With so much at stake, Caro must choose between the life she always wanted and the one she never could have imagined for herself.

From debut author Sarah Tolcser comes an immersive and romantic fantasy set along the waterways of a magical world with a headstrong heroine determined to make her mark.

This got better and better as the story went on, which is the best sort of book in my opinion! I love pirates but I wasn’t sure if this was going to be my sort of book and I’m glad to be wrong. It was a bit tricky keeping all of the countries and cities straight, and in that respect the world building wasn’t the strongest, but it was strong for the riverpeople. I loved learning about their connection to the river and their communities. I especially loved Caro and learning about both sides of her family!

Tarquin was infuriating at first, of course, but he really grows on you and so does his relationship with Caro. I guessed most of the twists early on but it was still a lot of excitement and action and piratey goodness. I’d love to see some Caro fanart, I wish I could draw! There was lots of kissing to be had as well, I’m always a fan of that. I’m curious to see where the sequel will take us and really glad I read this enthralling fantasy adventure. 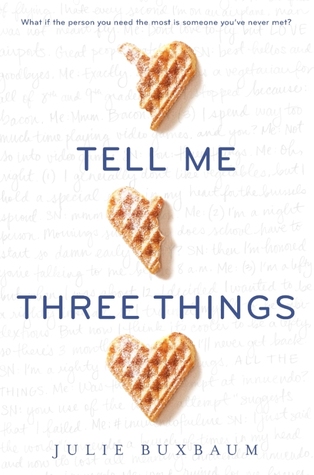 What if the person you need the most is someone you’ve never met?

Julie Buxbaum mixes comedy and tragedy, love and loss, pain and elation, in her debut YA novel whose characters will come to feel like friends. Tell Me Three Things will appeal to fans of Rainbow Rowell, Jennifer Niven, and E. Lockhart.

Everything about Jessie is wrong. At least, that’s what it feels like during her first week at her new ultra-intimidating prep school in Los Angeles. Just when she’s thinking about hightailing it back to Chicago—the closest place she has to something like home—she gets an email from a person calling themselves Somebody/Nobody (SN for short), offering to help her navigate the wilds of Wood Valley High School. Is it an elaborate hoax? Or can she rely on SN for some much-needed help?

The thing is, Jessie does need help. It’s been barely two years since her mother’s death, and because her father eloped with a woman he met online, Jessie has been forced to move across the country to live in LA with her stepmonster and her pretentious teenage son.

In a leap of faith—or an act of complete desperation—Jessie begins to rely on SN, and SN quickly becomes her lifeline and closest ally. Jessie can’t help wanting to meet SN in person. But are some mysteries better left unsolved?

I was worried that this book would be too heavy for me but it was the perfect balance of elements! It reminded me of The Start of Me and You in that regard. Grief is ever present, and so is loneliness and bullying, but Jessie had a winning voice and I liked being inside her head. She was relatable on so many levels and I’d like to think that I would have been her friend.

Of course I was most drawn to this book because of the anonymous penpal/You’ve Got Mail element, which I will never get tired of! I wasn’t sure until the very end who it actually was, though I had my hopes, and the reveal scene was a perfectly done comedy of errors. I thought Jessie’s relationship with her stepmom and dad were underdeveloped; there wasn’t much resolution, but her stepbrother Theo really grew on me and I liked their budding friendship. I also really liked Dri and Scarlett and seeing how friendships can shift over time without them necessarily meaning to.

Most of all, I loved the three things 🙂 I didn’t want to stop reading this book and couldn’t concentrate on anything else until I did. I even read it on my lunch break at work! If you’re a fan of sweet and heartfelt YA with a side of humor, this book is for you.

These reviews weren’t as mini as usual 😉 Have you read and enjoyed these books? Any suggestions for readalikes? Let me know!

Leave a Reply to Morgan @ The Bookish Beagle Cancel reply