I’m sure many of you know this about me already but I love Captain America a lot- the movies themselves, Chris Evans as Cap, and Steve Rogers himself as a character.

I ALSO love celebrating what one might call…. fake occasions? I’ve made cakes in the past for Harry Potter’s birthday, cupcakes for Voldemort Defeat Day, and many other pop culture moments just for funsies. Two years ago I created the Captain America Book Tag which I had the best time putting together- thank you Alexa Loves Reading for the idea!

This year to celebrate 4th of July (which just so happens to be Steven Grant Rogers’ 100th birthday!!) I’m making him a recommendation list. I tried my best to really think about what I thought Steve would enjoy as a person (as opposed to Chris Evans although there is some overlap!), as well as what I would consider important enough to add to his existing list from CA: The Winter Soldier.

Harry Potter by J.K. Rowling- this is non-negotiable as a momentous 20th century moment, but I also think Steve will LOVE them.
Illuminae by Amie Kaufman & Jay Kristoff- this might be more Chris Evans-ish but I like to think that Steve would be curious about space and fascinated by this thriller. Plus they read like government files.
The Time Traveler’s Wife by Audrey Niffenegger- an unconventional choice but Steve will relate to the man out of time feeling, as well as the heartwrenching romance.
The Hunger Games by Suzanne Collins- I think he would love this classic dystopian series for many reasons, including Katniss’ willingness to protect those she loves no matter the cost.
The Hate U Give by Angie Thomas- although I still haven’t read this exceptional book yet I know that Steve would appreciate the message, and the unfortunate glimpse into current society. 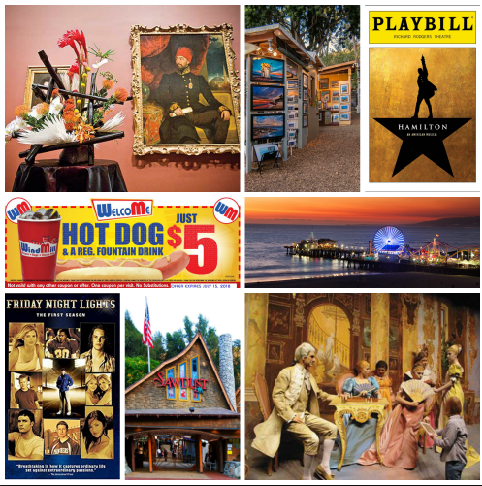 Hamilton– perhaps the most popular and consequential piece of American culture today. This is another non-negotiable that I think Steve will really appreciate. I bet Tony can get him really great seats too haha!
Friday Night Lights– greatest show ever with amazing character moments, thrilling sports moments, and music that burrows into your soul. Perfect.
Sawdust Art Festival & Pageant of the Masters– Laguna Beach has been an artists haven since the early 1920s and these are two of their most enduring and amazing art festivals. Perfect for Steve to explore!
Windmill Hot Dogs– my favorite hot dogs in the world, and not far from his hometown of Brooklyn; just down the Shore.
Santa Monica Pier– the west coast version of Coney Island, perhaps? 🙂
Art Alive at San Diego Museum of Art– once a year, artists choose a piece of art in the museum and make a floral arrangement to accompany it. It’s extremely cool.

That Thing You Do!– a one hit band from the 1960s with a great underdog lead.
Jurassic Park– a popcorn movie classic, plus dinosaurs!
Beauty and the Beast– the only animated movie nominated for a Best Picture Oscar, plus I think Steve would appreciate the artistry of the animation.
Casino Royale– just a favorite of mine and what I consider to be the best Bond movie.
National Treasure– I mostly picked this for the American history angle haha.
Wonder Woman– I’m thinking Steve and Diana might have a tad in common, don’t you?

So there you have it. A little cheesy, but so fun to put together. Happy 100th birthday, Captain America! No better day for it that America’s Independence Day- I’ll be eating lots of cake in Steve’s honor 🙂

What do you think of my recommendations? Are you a Captain America fan like I am? Let me know!