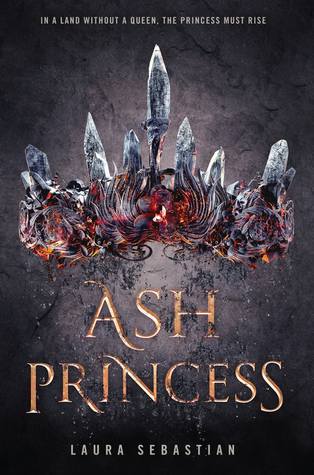 Theodosia was six when her country was invaded and her mother, the Queen of Flame and Fury, was murdered before her eyes. Ten years later, Theo has learned to survive under the relentless abuse of the Kaiser and his court as the ridiculed “Ash Princess.” Pretending to be empty-headed and naive when she’s not enduring brutal whippings, she pushes down all other thoughts but one: Keep the Kaiser happy and he will keep you safe.

When the Kaiser forces her to execute her last hope of rescue, Theo can’t keep her feelings and memories pushed down any longer. She vows revenge, throwing herself into a plot to seduce and murder the Kaiser’s warrior son with the help of a group of magically gifted and volatile rebels. But Theo doesn’t expect to develop feelings for the Prinz. Or for her rebel allies to challenge her friendship with the one person who’s been kind to her throughout the last hopeless decade: her heart’s sister, Cress.

Cornered into impossible choices and unable to trust even those who are on her side, Theo will have to decide how far she’s willing to go to save her people and how much of herself she’s willing to sacrifice to become queen.

I loved Ash Princess! It encompasses so much of what I love in YA fantasy- political machinations, moving pieces, magic, and romance. Soren and Cress were deeper characters than I expected while the Kaiser was pure evil, but Thora/Theodosia was a flawed, powerful, interesting main character. I had read comparisons to Sansa Stark and I can truly see them, in her demeanor and her situation. She endures so much hardship (much of which is difficult to read about) and manages to keep her inner strength. Some of the other characters were more cliche and I didn’t care for Blaise. It was definitely a slower book but with high stakes and death and consequences, and hints of magic- I loved it. It leaves you begging for the sequel!

Are you excited to read Ash Princess? Do you like reading about main characters similar to Sansa Stark? Let me know!

Leave a Reply to Morgan @ The Bookish Beagle Cancel reply