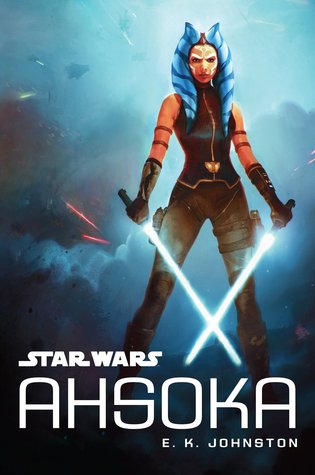 Fans have long wondered what happened to Ahsoka after she left the Jedi Order near the end of the Clone Wars, and before she re-appeared as the mysterious Rebel operative Fulcrum in Rebels. Finally, her story will begin to be told. Following her experiences with the Jedi and the devastation of Order 66, Ahsoka is unsure she can be part of a larger whole ever again. But her desire to fight the evils of the Empire and protect those who need it will lead her right to Bail Organa, and the Rebel Alliance.

Today is Star Wars Day so what better day for a Star Wars novel review! Ashoka was great- I’ve been getting really into Star Wars again and love SW Rebels so I was excited to learn more about Ahsoka Tano. The dialogue was a little meh towards the end but I loved the concepts, Ahsoka’s story and how it was filled in, and how it connects to the Star Wars Universe! I feel like it captured Ashoka’s voice well. There were many delightful cameos that served the purpose of the story while being fun for fans and I loved learning more about Kyber Crystals and lightsabers. It makes me wish we could have an animated show or miniseries about this period (post Clone Wars, pre Rebels). I also liked the flashback chapters, they were short but filled in interesting gaps.

I didn’t find a ton of the new characters compelling, but there were a couple that stood out. I liked seeing the Force through the eyes of various characters and the emphasis on family. I thought the encroachment of the Empire in various worlds was believable, how they began to systematically take over the galaxy. There were a couple action sequences that managed to shock me as well. And there was an intriguing suggestion that Kaeden, the character who first befriends Ahsoka and that we get to know best, has a crush on Ahsoka. There isn’t any romance in the book (everyone is rightly worried about survival) but it was cute how her friends and sister would tease her- she had to grow up so fast that a teenage crush is a welcome bit of normalcy.  Overall, Star Wars: Ahsoka is a welcome addition to SW canon! I’m not sure how accessible it is to non-Star Wars fans, or even fans who haven’t seen one of the animated shows, but those even vaguely familiar with the character will enjoy it.

Are you a Star Wars fan? Have you read Ahsoka yet or are you planning to? May the Fourth be with you 😉

2 thoughts on “May the Fourth Be With You: A Review of Ahsoka by E.K. Johnston”