The frost king will burn.

Seventeen-year-old Ruby is a Fireblood who has concealed her powers of heat and flame from the cruel Frostblood ruling class her entire life. But when her mother is killed trying to protect her, and rebel Frostbloods demand her help to overthrow their bloodthirsty king, she agrees to come out of hiding, desperate to have her revenge.

Despite her unpredictable abilities, Ruby trains with the rebels and the infuriating—yet irresistible—Arcus, who seems to think of her as nothing more than a weapon. But before they can take action, Ruby is captured and forced to compete in the king’s tournaments that pit Fireblood prisoners against Frostblood champions. Now she has only one chance to destroy the maniacal ruler who has taken everything from her—and from the icy young man she has come to love.

I loved this!!! If you get past the first chapter, it turns into this really exciting, intense, fun fantasy that has the tropes you know and love but uses them in exciting to read ways. I liked the writing style, I loved the MC Ruby (strong, feisty, not annoying!), and I loooooved the slow burn hate-to-love romance. So. Good. The characters in general were a definite highlight. The pace is a little fast at times; it could use more worldbuilding, but I liked what there was, I liked the elemental magic, and I just really enjoyed reading this book despite the cliches. I can’t wait for the sequel, which comes out this fall! 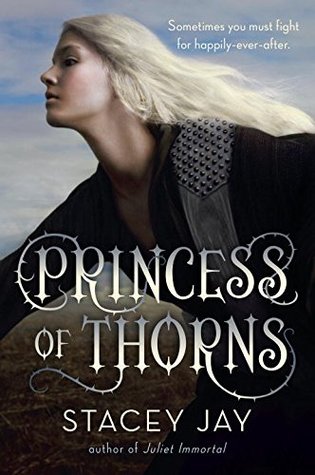 Game of Thrones meets the Grimm’s fairy tales in this twisted, fast-paced romantic fantasy-adventure about Sleeping Beauty’s daughter, a warrior princess who must fight to reclaim her throne.

Though she looks like a mere mortal, Princess Aurora is a fairy blessed with enhanced strength, bravery, and mercy yet cursed to destroy the free will of any male who kisses her. Disguised as a boy, she enlists the help of the handsome but also cursed Prince Niklaas to fight legions of evil and free her brother from the ogre queen who stole Aurora’s throne ten years ago.

Will Aurora triumph over evil and reach her brother before it’s too late? Can Aurora and Niklaas break the curses that will otherwise forever keep them from finding their one true love?

This is basically everything I love in a fantasy! I didn’t love the ogre queen’s few chapters but I appreciated the glimpse into the villain’s perspective, and I love that there were ogres in general. And fairies and witches and all sorts of excellent, fun fantasy elements. I loved this retelling, which was a sequel to Sleeping Beauty in a way. Aurora was such an awesome character and I looooved her very Mulan/Shang, Alanna/Jon relationship with Niklaas. Slow burn, bantery, passionate perfection. Of course secrets get revealed and I thought the reactions were believable and well-thought out. No quick forgiveness, but no unnecessary guilt either. I just loved them together. Lots of action and swoony romance and fantasy goodness in this satisfying standalone!

Fans of Julie Kagawa’s Talon and Renee Ahdieh’s The Wrath and the Dawn will devour this action-packed fantasy adventure about a girl who chooses to surrender herself to a deadly dragon rather than marry an enemy prince.

When two warring kingdoms unified against a deadly menace laying waste to both their lands, they had to make a choice: vow to marry their heirs to one another, or forfeit their lives to the dragon.

Centuries later, everyone expects the sheltered princess Sorrowlynn to choose the barbarian prince over the fire-breathing beast—everyone, that is, except Sorrow, who is determined to control her own destiny or die trying.

As she is lowered into the dragon’s chamber, she assumes her life is over until Golmarr, the young prince she just spurned, follows her with the hopes of being her hero and slaying the dragon. But the dragon has a different plan. . . .

If the dragon wins, it will be freed from the spell that has bound it to the cave for centuries. If Sorrow or Golmarr vanquish the dragon, the victor will gain its treasure and escape the cave beneath the mountain. But what exactly is the dragon hiding?

There are no safe havens for Sorrow or Golmarr—not even with each other—and the stakes couldn’t be higher as they risk everything to protect their kingdom.

This was a pretty great dragon book! Lots of fun, tons of action. I thought the pacing was a little uneven- it starts off on an exciting note and keeps the setting moving, but that means lots of walking/exploring/camping scenes, which get old after awhile for me. It also read slowly for some reason; I felt like I was making so much progress and not much % would have changed. I will say that around 30% in, I had no idea where the story was going, in a good way! The dragon mythology felt fresh and interesting to me and I enjoyed the characters a lot. It’s all a little fast (8 days!) and a little instalovey but Sorrowlynn and Golmarr really suit each other. He also appreciates her for all the right reasons, which is a relief. The dialogue was stilted at times but I really enjoyed the second half of the book especially and need to know what happens in the sequel. It leaves you wanting more without being an awful cliffhanger.

Are you a fantasy fan? Have you read any of these books or do you plan to? Share your thoughts in the comments below!

8 thoughts on “Mini Review Monday: All the Fantasy”