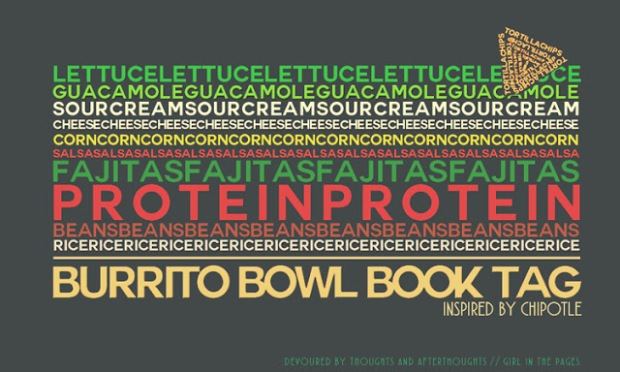 The Burrito Bowl Tag was created by Cristina from Girl in the Pages and Joey from Thoughts and Afterthoughts and I was tagged by Hannah from So Obsessed With… ages ago! Guess it’s time to finally complete this fun tag.

RICE | The Foundation – The book that got you into reading 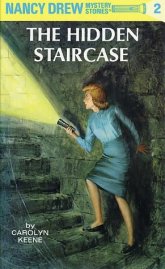 The Hidden Staircase by Carolyn Keene; one of the first chapter books I ever read. I even remember my dad taking me to Barnes and Noble to buy it! I loved mysteries for the first few years of my reading life because of Nancy Drew, and I read a zillion of these books.
BEANS | The Filler – The book with a whole lot of nothing 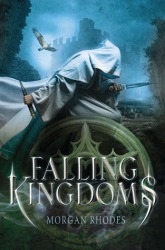 Falling Kingdoms by Morgan Rhodes. I don’t one star often, but when I do I mean it. And this book had little to offer besides cliches, cardboard characters, and eye rolls.

PROTEIN | The Building Block – A book quote to live by 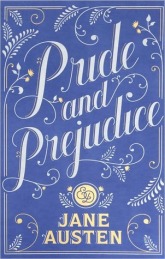 “I cannot fix on the hour, or the spot, or the look, or the words, which laid the foundation. It is too long ago. I was in the middle before I knew that I had begun.”

Pride and Prejudice by Jane Austen; I love this quote a lot. I feel like it encompasses the feeling of falling in love but also making close friendships. I actually included this on our wedding programs!

FAJITAS | The Crunch of Texture – A book with immaculate world-building 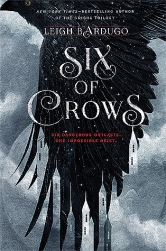 Six of Crows by Leigh Bardugo. I could feel the grit of the Dregs and picture the canals and walkways and frozen tundras. I felt like I knew the characters and their struggles, and that I could smell and taste everything- the world building was immersive but never overwhelming.
SALSA | The Dance of Flavor – A book that kept you on your toes 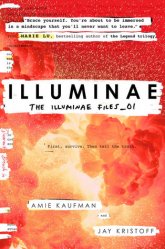 Illuminae by Amie Kaufman and Jay Kristoff- I read this very recently and had no idea what to expect. The use of found documents and various POVs really gave it an unreliable narrator vibe, which added to the tension and kept me turning the pages. Plus I was so anxious to see how AIDEN was going to react to each problem!
CORN | The Explosion of Sweetness – A memorable scene with friendship/romance 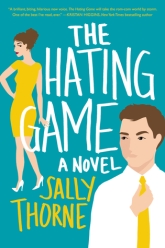 My memory is not the best and I tend to read books that are filled with amazing friendship and romance scenes since that’s my jam! Sooooo I’m going to go with The Hating Game by Sally Thorne, which is basically FILLED with memorable and hilarious scenes. But one of my favorites that sort of blends friendship and romance is when Lucy first goes to Josh’s apartment; they’re both clearly attracted to each other but also trying to navigate becoming friends. And instead of rushing anything, Josh gives Lucy a fluffy blanket on the couch, a cup of tea, and watches tv with her while they both relax and coexist. It’s such a turning point for their relationship and it’s SO adorable!! 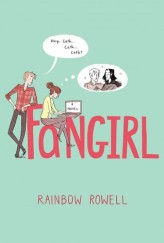 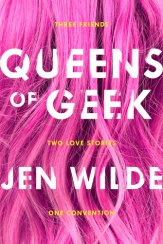 Cath from Fangirl by Rainbow Rowell and Taylor from Queens of Geek by Jen Wilde. I feel like they would really understand each other, from their struggles with anxiety to their fangirl tendencies. They both LOVE their respective book fandoms so much and as we all know, there’s no easier way to make friends than through a mutual love of books and fandom! 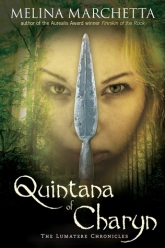 The classic answer is of course Luna Lovegood from Order of the Phoenix, whom I adore, but Quintana of Charyn from The Lumatere Chronicles by Melina Marchetta has to be one of them. She’s extremely strange and interesting.
GUACAMOLE | The Cost of Creaminess – A book you paid too much for 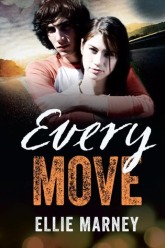 Not including foreign editions of Harry Potter, it would have to be Every Move by Ellie Marney, which I ordered from the publisher in Australia. It didn’t break the bank but it was more than I normally pay for one book, and it was worth every penny. I’m still sad it was never published in the US/Canada. 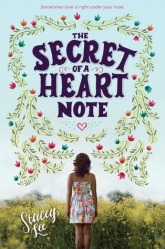 The Secret of a Heart Note by Stacey Lee. Mim can smell emotions, and each person’s particular emotions have very particular scents. I’ve never read a book like that! It was charming and unique and lent multiple layers to the relationships in the story.

CHIPS | Le Pièce de Résistance – A must-read rec, if you like… 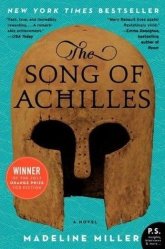 The Song of Achilles by Madeline Miller is one of my favorite books ever and an absolute must read for fans of historical fiction, mythology retellings, and achingly beautiful prose.

TABASCO | The Kick to the Face – Your favorite fight/action sequence 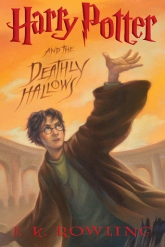 I’m going with a throwback sequence here: Molly Weasley vs. Bellatrix Lestrange. It’s one of the most charged fight scenes in Deathly Hallows and I loved that it showcased this physically emotional side of Molly that we weren’t privy to before. Plus “Not my daughter, you bitch!” is an iconic line.

I’m tagging anyone who wants to built their own Burrito Book Bowl! What would some of your choices be?